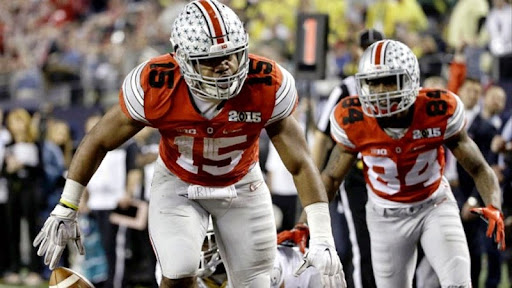 "The chase is complete," Meyer said during the trophy presentation. "It's done. It's over. They accepted their final mission, their final assignment and their final directive, and they did it. That was our whole mantra this last couple of weeks. A job well done, and we're very grateful."

Ohio State began the first major college football playoff as the fourth and final seed, and as a team that faced questions about whether it belonged at all. It was a team that never would have had a chance to win a title under the old postseason system, which only matched the top two teams in rankings that leaned heavily on a computer-generated formula.

Meyer's Buckeyes overcame two injured Heisman contenders and one awful early season loss at home to Virginia Tech to win their first national title since 2002. Back then the Bowl Championship Series decided No. 1 at the end of the season -- usually.

Oregon took an early 7-0 after Mariota capped the game's opening drive with a 7-yard touchdown pass but Ohio State, led by Elliott and quarterback Cardale Jones, scored the next 21 points and never trailed again.

In second half, two Ohio State fumbles helped Oregon get within 21-20, but the Buckeyes drove 76 yards in nine plays before Elliott rumbled in from two yards out to make the score 28-20 on the final play of the third quarter. Two fourth quarter touchdowns sealed the victory, and the championship.

Elliott's 246 rushing yards gave him a total of 696 over the final three games of the season, which included the Big Ten championship game against Wisconsin and the playoff semifinal, in the Sugar Bowl against Alabama Jan. 1.

Mariota did not perform badly, completing 24 of 37 passes for 333 yards (in addition to 39  rushing yards) and two touchdowns, with his lone interception coming on the game's final, meaningless Hail Mary pass. but the Ducks' warp-speed spread offense missed too many red-zone opportunities and couldn't unleash its running game against linebacker Darron Lee and an Ohio State front seven stacked with future NFL draft picks. The Ducks were held to their lowest point total of the season, four touchdowns below their average coming in.