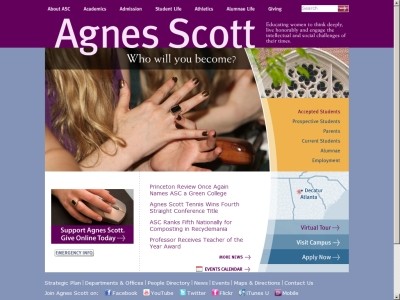 Review: Agnes Scott College (commonly known as Agnes Scott) is a private undergraduate college in the United States. Agnes Scott's campus lies in downtown Decatur, Georgia, nestled inside the perimeter of the bustling metro-Atlanta area. The college was founded in 1889 as Decatur Female Seminary by Presbyterian minister Frank H. Gaines. In 1890, the name was changed to Agnes Scott Institute to honor the mother of the college's primary benefactor, Col. George Washington Scott. The name was changed again to Agnes Scott College in 1906, and remains today a liberal arts women's college. Agnes Scott currently enrolls 868 students. In 2009, the student to faculty ratio was 9:1. Eighty-seven percent of the faculty are full-time, and 100% of the tenure-track faculty hold terminal degrees. The undergraduate school offers 30 majors and 25 minors, and is affiliated with numerous institutions, including Georgia Institute of Technology, Emory University School of Nursing, and Washington University. Students who graduate from Agnes Scott receive a Bachelor of Arts degree. Agnes Scott is affiliated with the Presbyterian Church (USA), and is considered one of the Seven Sisters of the South. The current mission of the college, adopted in 2002, states: Agnes Scott College educates women to think deeply, live honorably and engage the intellectual and social challenges of their times. 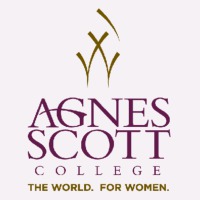 Recommended: Yes -0 No -0Click here to Inform about a mistake 3141 Rating: