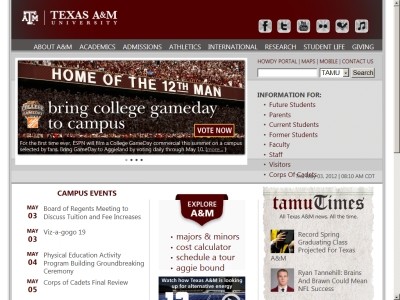 Review: Texas A&M University (often referred to as A&M or TAMU) is a coeducational public research university located in College Station, Texas. It is the flagship institution of the Texas A&M University System. The seventh-largest university in the United States, A&M's enrollment for Fall 2010 was over 49,000 students in ten academic colleges. Texas A&M's designation as a land, sea, and space grant institution reflects a broad range of research with ongoing projects funded by agencies such as the National Aeronautics and Space Administration (NASA), the National Institutes of Health, the National Science Foundation, and the Office of Naval Research. The school ranks in the top 20 American research institutes in terms of funding and has made notable contributions to such fields as animal cloning and petroleum engineering. The first public institution of higher education in Texas, the school opened on October 4, 1876 as the Agricultural and Mechanical College of Texas. Its original mission was to educate males in farming and military techniques. Under the leadership of President James Earl Rudder, in the 1960s A&M desegregated, became coeducational, and dropped the requirement for participation in the Corps of Cadets. To reflect the institution's expanded roles and academic offerings, the Texas Legislature renamed the school to Texas A&M University in 1963. The letters "A&M," originally short for "Agricultural and Mechanical," are retained only as a link to the university's past. The school's students, alumni, and sports teams are known as "Aggies". The main campus is one of the largest in America, spanning 5,200 acres (21 km2), and includes the George Bush Presidential Library. Approximately one-fifth of the student body lives on campus. Texas A&M has approximately 800 officially recognized student organizations. Many students also observe the traditions of Texas A&M University, which govern daily life as well as special occasions, including sports events. Aggie sports teams compete in the Big 12 Conference. A&M operates two branches: Texas A&M at Qatar and Texas A&M University at Galveston. Working with agencies such as the Texas AgriLife Research and Texas AgriLife Extension Service, Texas A&M has a direct presence in each of the 254 counties in Texas. The university offers degrees in over 150 courses of study through ten colleges and houses 18 research institutes. Texas A&M has awarded over 320,000 degrees, including 70,000 graduate and professional degrees. As a Senior Military College, Texas A&M is one of three public universities with a full-time, volunteer Corps of Cadets. It provides more commissioned officers to the United States Armed Forces than any other school outside of the service academies.

Recommended: Yes -0 No -0Click here to Inform about a mistake 2 Rating: